Of Petroglyphs and Dinosaurs

of petroglyphs and dinosaurs

Last Friday TLM and I drove to Vernal, Utah. The reason for our trek to the wilds of eastern Utah was my participation in a half marathon run (“The Better Half Marathon,” see what they did there?) as mentioned in a previous post. We left early(ish) in the day because TLM had, working for once as our tour operator, a post I normally occupy, identified two pre run activities in which we could participate on Friday. I’m going to treat the trip in two separate posts because (spoiler alert) the run was not what I had hoped for and is a story of its own.

We arrived in town around 12:30. We planned on heading farther east to Dinosaur National Monument, but ran into a snag. Local authorities were closing down the main street (highway 40 which we needed for our destination). Police had the road ahead blocked off and were forcing everyone onto side streets. A quick internet search revealed that tonight was the local high school homecoming game (a fact that will feature somewhat prominently later in this story. That sentence is something we in the writing biz call foreshadowing and, when handled skillfully, adds tension to the story. Do you feel it? Well, I didn’t say I handle it skillfully.) and in a few minutes the street we were on would be a parade route. TLM suggested we reverse course and find something to eat at the other end of town since the other activity she had planned lay in that direction.

Having done so, we stopped and had a bite to eat at Freddy’s Frozen Custard and Steakburgers. I really wanted onion rings with my burger, but hesitated because those things had as many calories as the burger. I hadn’t eaten breakfast but still….

“Dear,” TLM said, only that cold written word doesn’t convey the exasperation saturating her voice. She did, indeed, use the word “Dear” but her tone of voice said “Dummy.” Anyway,

She closed her eyes and her jaw muscles bulged. “13.1 miles,” she said in what I’ll now call the DT (“Dummy Tone). “You can afford a few onion rings.”

Thus reassured, I wolfed down my burger and rings and we were off to the McConkie Ranch—privately owned land that is home to a series of petroglyphs. When we arrived, we stopped off first at the Visitor’s Center in order to make a suggested donation for our visit.

We then proceeded up the trail.

At the trailhead a fine wildlife sculpture greeted us.

And we were on our way. 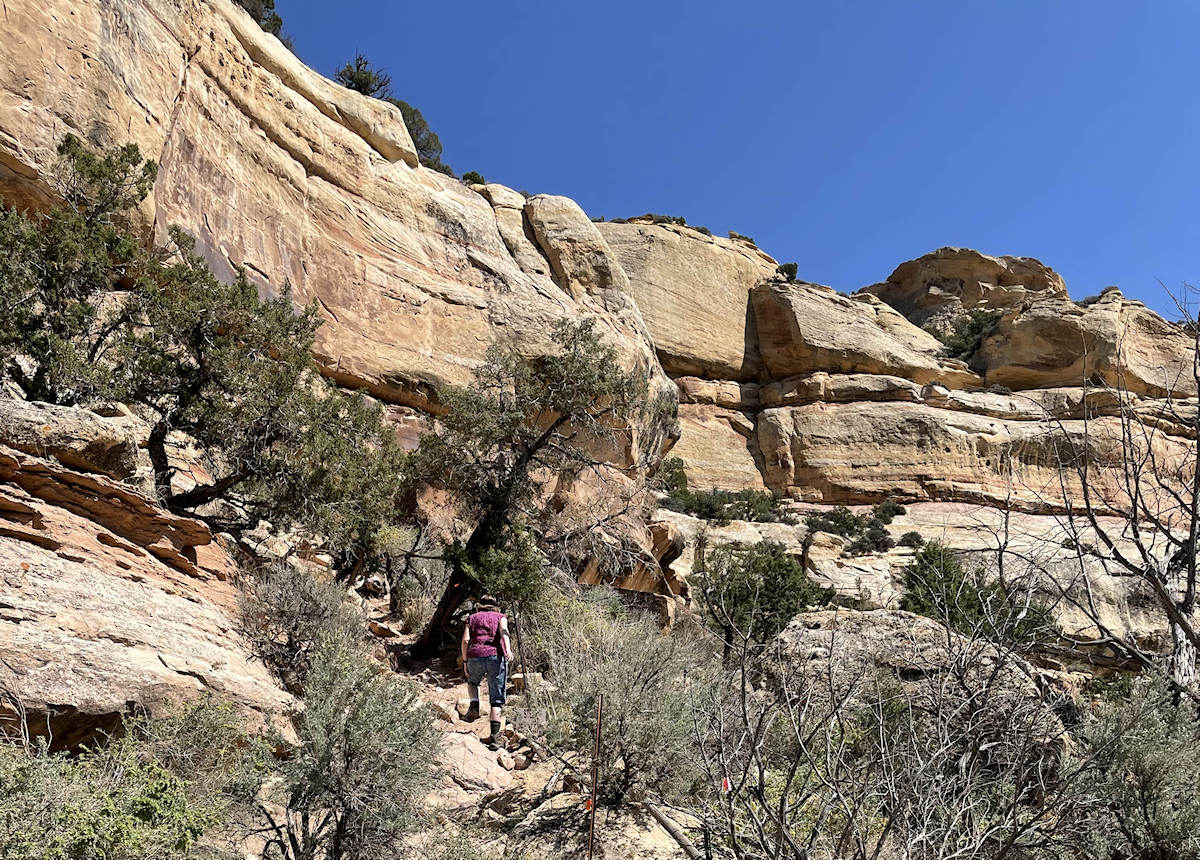 We had a lovely, if a bit smokey, day for our visit.

The petroglyphs were fascinating.

After our visit to the petroglyphs we traveled east to Dinosaur National Monument. 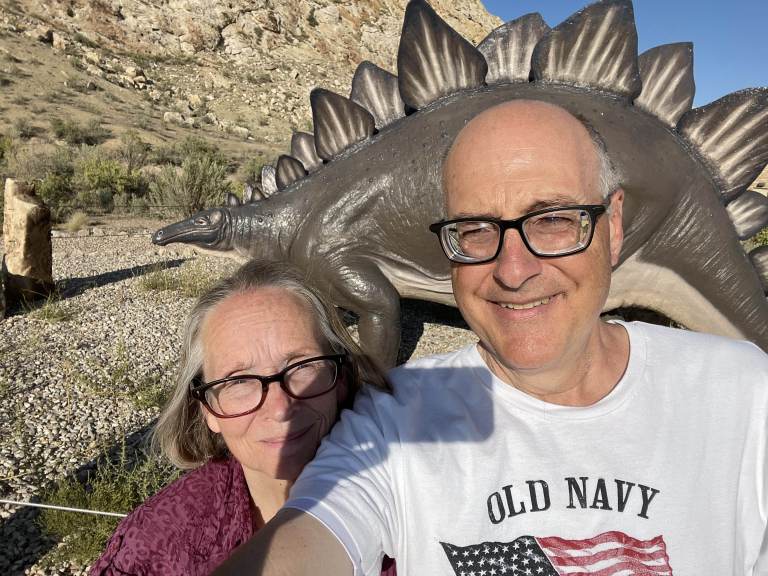 We puttered around in the Visitor’s Center for a bit then took a shuttle bus to the Wall of Bones. Earl Douglas, a paleontologist associated with the Carnegie Museum in Pittsburgh, Pennsylvania discovered dinosaur bones here in 1909. His first discovery was a set of bones protruding from sandstone at the top of a ridge. Upon excavating that find, he uncovered many sets of bones in what became known as the Carnegie Quarry. At the Wall of Bones, excavation has revealed dinosaur fossils that have been left in place for viewing.

After we left the Wall, we walked back to the visitor’s center on the Dinosaur Discovery path. Along the way, we took two side trips: one to visit fossil clams, the other to see more dinosaur bones in situ.

Those were the two excursions TLM had identified for us and it was a nice half day experience. Little did I know the tragedy that experience set up. Remember what a great day it was? How sunny and clear? And in the mid 80’s the temperature was pleasant as well. All the ingredients for a catastrophe. But before we get there, another pitfall awaited.

It was five ten by the time we left the Monument and headed into Vernal. We had not yet checked into our hotel which we decided to do before eating dinner. When I looked into places to stay, I had seen more and less expensive options. We were looking only for a place to lay our heads one night (and a short night at that. The run started at 7:00 am which I calculated meant I’d need to arise at 5:00). So, I decided to reserve a room at the Econostay motel. Ha.

Rolling into Vernal and looking for our hotel, I was confused. Google told us it was 311 East Main street, but as we approached the address, I saw only an Econolodge.

Ten minutes and several passes later, I decided that the hotel with the Econolodge sign was the Econostay where I had booked a room. Hmmm. Odd, but nothing disturbing. We stopped I picked up the key and we entered our room.

To understand this next part, we must take a brief detour to Martin’s Cove Wyoming. Years ago, TLM and I decided to visit this historic location. Martin’s Cove is the site at which members of the Martin and Willey handcart companies had sought shelter in October, 1856 after a brutal early winter storm laid down copious snows and dropped the temperature below zero. I had ancestors in the Martin Company and wanted to visit the place they had suffered.

The closest large(ish) town is Rawlins, so I booked a room there for the night before our visit. That was a horrible night for TLM. She awoke at 2:30 am with a blinding headache. We had brought no medication with us, so for three and a half long hours I tried my best to nurse her, but the pain was unrelenting. At six I searched for and found medication that was of little help. It was well into the afternoon before she felt any relief. Thinking back on the cause, we determined that it was the fact that someone had been smoking in the room. We marked it at the time we checked in, but other than the obnoxious odor had not thought much about it. Now, we decided that had been a terrible mistake.

Back at the Econostay(Lodge), we opened the door.

Someone had been smoking in the room.

Visions of our stay in Rawlins rose in our minds, sufficient by themselves to summon a pain behind our eyes.

I marched down to the office made the accusation and demanded another room. Well, requested more than demanded I suppose. The fact is I’m not that imperious.

“I’m sorry,” the manager said sounding the polite sort of sorry that suggests the word has no emotional foundation. “We have no rooms. We are completely booked.”

“Well,” I spluttered, and, in fact, I do splutter. It’s the sort of thing people who are not imperious do when attempting to demand without being quite capable of pulling it off. “I’m going to find another room and if so I expect my money back with no cancellation fee.”

The manager smiled—a polite sort of smile that again was without emotional support.

Nothing showed up. Finally, I called one of the national chains (Quality Inns, I believe) and spoke with an actual person who informed me they had one room left for three hundred and thirty three dollars. After a quick consultation with TLM we declined.

“I do have an alternative,” the man said. “The Antler Inn has a room available for two hundred fifteen dollars.” Again, after a quick consultation we agreed. I completed the purchase and we sagged with relief. (And thus, incidentally, we determined the price of blinding pain—it’s somewhere north of $215 and south of $333.)

At TLM’s suggestion, we did not give up our Econostay(Lodge) room pending actually moving our suitcase inside the new place. We made our way to the Antlers Inn down the road. I entered the establishment.

“How can I help you,” the man at the desk asked.

“I have a reservation,” I said.

“But I…” There I went, spluttering again.

“I don’t know why they keep doing that.” He shook his head, dismayed. “I’ve tried to get them to stop, but they keep booking people into this place, but every room is already occupied.” With a rueful laugh he continued, “One lady just called me and insisted that because some anonymous person on the phone told her she had a room, that I must give her a place to stay.” He snorted. “I told her ‘If you can convince someone to let you stay in their room, you’re welcome to it. Otherwise, I can’t help.’”

I thanked the man and joined TLM in the car. We pulled around the corner and for the next forty-five minutes determined that, indeed, there were no rooms in the Inns, Hotels, or Motels on Friday night in Vernal, Utah.

“What is going on?” I said to no one in particular, but TLM, Librarian that she is, was on the case.

“It’s homecoming,” she announced a moment later. “Remember the parade this afternoon? That was the homecoming parade. Vernal is playing Payson tonight in football. I bet people are in town for that.” She frowned and tapped at her phone. “Oh,” she said and shook her head. “And there’s an interscholastic mountain bike competition tomorrow morning.” She glanced up from her phone. “And your race.” She lowered her phone. “So, we have three activities in Vernal at the same time bringing folks in from out of town.”

And, indeed, that was it. We discovered later from some friends whose son mountain bikes that when the venues are announced for mountain bike races, competition for hotel space is fierce.

Back to the Econostay(Lodge) we trudged (metaphorically, of course, since we were in our car. But it sure felt like trudging.)

“We’ll make the best of it,” TLM said with hope. “We’ll open the door and the windows. It’ll work out.”

TLM, a real trooper. Tireless in doing good, hopeful when facing Dante’s gate, TLM makes gourmet meals from lemons. So, we did our best and, with some trepidation, turned off the light to sleep perchance to dream, and not awake screaming with pain in the lonely hours, before the big race on the morrow.

Stranded on an Island (Part 2)